Home → EMR-EHR Blogs → “Oh, say does the banner yet wave”

“Oh, say does the banner yet wave”

Home → EMR-EHR Blogs → “Oh, say does the banner yet wave” 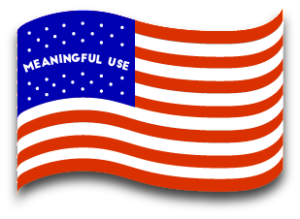 What is more American than baseball, hot dogs, and apple pie? Meaningful Use. It is quite representative of America: it has a dreamy ideal and a baseball game mentality.

Meaningful Use began when President Obama signed the American Recovery and Reinvestment Act in 2009. This act was developed to create jobs, improve student achievement, ensure transparency regarding the usage of funds, and help our country thrive in the 21st century. For many, MU was labeled as the American Dream because it would provide complete and accurate information, improved coordination of care, and patient engagement in order to improve lives of the healthcare providers, practitioners, and patients.

Also, like the American Dream, MU promises financial rewards through increasingly hard work. Take into consideration the toughening requirement change from Stage 1 to Stage 2. Stage 1 and Stage 2 have the same objectives, but Stage 2 requires higher threshold percentages. To elaborate, “EPs must use computerized physician order entry to place medication orders for more than 30% of patients who have at least one medication or place more than 30% of all medication orders. In Stage 2, the latter is the only option, and the threshold is 60%” (9 Ways Stage 2 Meaningful Use Differs from Stage 1 by Chart Logic). And sadly some participants are not up to this laborious challenge. Additionally, Meaningful Use Stage 1 contains 25 measures. In order to receive federal money, participants must meet 13 required core objectives and 5 menu objectives from a list of 9. It seems simple in writing…well everything does initially. It is also easier to be pessimistic about such situations, but the American Dream can’t be achieved without hope and a strain of optimism.

American optimism is extremely prevalent at a baseball game. In the MU game, on the field we have the government versus the healthcare providers; it is going to be a close game. Up at bat, we have healthcare providers, who were not satisfied with Stage 1 of Meaningful Use.  “It has been reported that over 20 percent of providers have already dropped out of the incentive program, with the numbers expected to rise during Stage 2 and 3” (Healthcare Informatics). Stage 2 and 3 might be a win for some healthcare provider teams who advance through the stages, moving around the bases, if Meaningful Use’s constraining objectives hold other providers in place. From the bleachers: this game may appear a bit ironic, because neither the players nor fans are having any fun. The effect of the differences between Stage 1 and 2 is baseline runner interference for both the government and healthcare provider teams. These differences include changes in patient communication and health information exchange: all improvements for the public good, and yet, the rule changes create forfeit games from “no shows”, narrowing the market for the fan base. Gabriel Perma (Healthcare Informatics) summarized a survey conducted on physicians regarding Stage 3 and he can succinctly and confidently summarize as, “Not pleased.” For some, the aggregate physician opposition to Meaningful Use outweighs the hypothetical benefits of the program at the moment. But, miracles do happen, all nine innings must be played, and maybe Meaningful Use will rectify the current problem between healthcare providers, practitioners, and patients.

It is data driven, motivated, and well meaning – all in all MU has good intentions. But, health professionals expecting a plethora of benefits from preparatory hard work may become disheartened by the lack of progress. Although this topic has been debated previously, recently in June 2015 the Senate has been discussing the increasingly tough Meaningful Use requirement and the idea of public good outweighing any player issues. (Read: Senate HELP Committee Announces Hearings to Improve EHR Program) In reality, there is no concrete evidence supporting or denouncing the long term effects MU because it is still being played out. For some, they consider alternatives games, playing in a field where there are no EHR requirements. A physician could also stop taking Medicare and Medicaid patients – effectively retiring early from the game.

What are your thoughts on how MU has positively affected your practice, or your considerations for changing the game you’re playing?